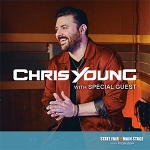 Multi-platinum entertainer Chris Young will headline the Main Stage on Friday, Aug. 7 at 7:30 p.m. Young has accumulated an impressive list of accomplishments, including membership in the iconic Grand Ole Opry, two billion on-demand streams and 11 career No. 1 singles. The Grammy and ACM nominated vocalist headlined the Raised on Country World Tour in 2019, playing to more than 400,000 fans in three countries. Chris’s newest hits – “Drowning,” “Raised on Country” and “Town Ain’t Big Enough” featuring Lauren Alaina – will be included on a new album releasing this year. An opening act will be announced at a later time.

Tickets Go On Sale To the Public on Friday, January 31st at 10am