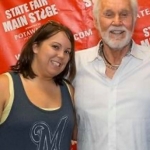 Growing up I grew up on a lot of different music. One that was always a staple in my boombox was Kenny Rogers. In fact I wore out my cassette tape of his Christmas Album with Dolly Parton.

Back in 2015 I was just starting off on Y106.5 doing a weekend shift. I purchased tickets to see Kenny Rogers at the Wisconsin State Fair. In fact, I lucked out with being on the site right when tickets went on sale and ended up getting in the first 20 rows. I told my boss that was I going to the show, and I asked if there was any way that maybe I could interview him. He told me to go ahead and reach out, and everyone myself included knew this might be a long shot because why would a country legend want to talk with me.

Well to my surprise they said sure. Finding out this news I was ecstatic but also nervous as hell lol. What do you ask someone like Kenny that maybe people haven’t asked him before.

The day finally came, and I was sweating more than normal. It was August, and it was a super humid day, so that really didn’t help me out any more. Kenny was gracious with his fans. We sat and waited in a room while he took the time to do a meet and greet with his fans. I saw people with shirts on from former tours of his. Kenny just had a glow when he talked with his fans.

It was then my turn to go up and talk with him. He was sitting down because I guess a couple weeks before hand he had knee replacement surgery so he wasn’t moving around too fast. I think that he could also tell how nervous I was to not only meet him, but to interview him. With in a few seconds just his charm and charisma calmed me down. It honestly felt like I was talking to an old friend with him.

We talked about why he thinks of himself as a entertainer and not just a singer. He also filled me in on what he would be doing if he wasn’t a singer. Not to many people knew that his was an amazing photographer. In fact he published three books with his photos. The first Kenny Rogers’s America in 1986, Then Your Friends and Mine in 1987 and his last was a oversized coffee table book called This Is My Country in 2005. In 2014 he was even honored by the Professional Photographers of America.

Kenny Rogers will always be one of my top favorite artists of all time. I am so grateful that I was able to not only see him in concert but to meet him and talk with him. RIP Kenny.