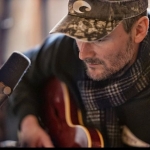 This past week some of country music’s biggest and newest stars have been in Nashville for an event called CRS. Eric Church was one of the artists down there talking to country radio folks. He recently reveled that he has tried something new for his seventh studio album. Church has been known to not stick to the norm when it comes to records and releasing new albums. I mean he has sent some of his Church Choir Members his new record on vinyl by surprise.

So what does he have in the works for us know. Eric is from North Carolina and he went into the mountains of Banner Elk. Where he recorded 28 songs in 28 days in an old restaurant that he converted into a studio. There were even days he said he didn’t sleep. He pushed himself to the limits to find that creativity he was looking for. Now it’s very possibly that not all 28 songs will make it on the new album. But he is proud of what he did. You can hear one of his new songs below.