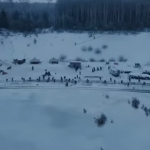 Netflix just released a little Valentine’s Day gift to Stranger Things fans. The first teaser trailer for season 4 is now out. The trailer doesn’t give away too much, but it now shows us that the series is expanding its world outside of Hawkins Indiana.

Also fans of the show is saying the biggest surprise is at the end of the clip.