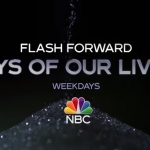 Like sands through the hour glass, so are the days of our lives… Or at least it has been for the past 50 years.  “Days of Our Lives” was a soap I grew up watching with my mom. From watching the love triangles of Bill, Laura, Mickey to John, Marlena and Roman the story lines have kept people glued for years. But it may be an end of an era.

TMZ reported that the producers of the show have all been let out of their contracts early. Which means if they want to leave for a new job they can do so now.

Reports are saying the show is going on an indefinite hiatus at the end of the month. Then the network is going to figure out what they are going to do for season 56.

Fans don’t panic just yet, they show has shot 8 months in advance so they do have enough shows to last at least thought the summer.

Recently Days has just gone in a new direction with the show. They have gone into the future. Check out what is in store for the residents of Salem