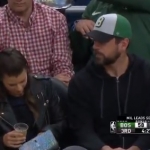 Big congratulations to the Milwaukee Bucks. Last night their win has them set to move on to the Eastern Conference Finals. Of course they won’t know who they will be playing until later tonight.

However, that wasn’t the only thing that happened last night at the game. One Milwaukee fan took the chance to show Danica Patrick just how friendly Milwaukeeans are… or how brave we can be. It happened during the third quater fo the game. Danica was sitting courtside with ber bf Aaron Rodgers. There was wine that was being delivered. One fan sitting behind her took the chance to buy her a drink. Danica did try to pay the man back for the drink but he wasn’t having it. In fact he even bought the woman next to her a glass too.

I have to say Aaron’s face just says it all.

Danica Patrick tried to pay for a drink court side but the fan just gave it away for free 😂 pic.twitter.com/jwuXEI0MCm