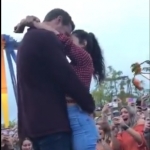 Now typically I am not one that will read spoilers about the upcoming season of The Bachelor or Bachelorette. However, something really caught my eye this week. Besides Peter being in the news about the accident he had earlier this week leaving him with getting stitches in his face. We are finding out more about one of the girls that is on the show. Now if you don’t want to know STOP READING NOW… Otherwise proceed with caution.

Currently, they are filming the new season. We know that at least one time on every season there is a date where takes place with a musical act. This time around it happens to be country star Chase Rice. Reality Steve is someone that has always had the inside scope on what is going on. Recently he posted about a 1 on 1 date that Peter had with one of the women at the amusement park where then Chase Rice was performing. Here is where it gets interesting. Turns out the woman – Victoria. Also dated Chase Rice. She dated him before she went on the show. According to the stories it looked like she had no idea what was going on in the date until she walked in and saw that Chase Rice was going to be singing to them.

(VIDEO): Pretty much the moment Victoria realizes she’s walking up to a concert being performed by a guy she used to date. And being sick to her stomach. Victoria wanted no part of this. She can’t even look at Chase.

(VIDEO): Pretty much the moment Victoria realizes she’s walking up to a concert being performed by a guy she used to date. And being sick to her stomach. Victoria wanted no part of this. She can’t even look at Chase. pic.twitter.com/iyMFS476iX

Of course she was pretty upset, which let’s be honest we would all be upset if we went on a date with our ex there. Once the song was over she wasted no time booking it out of there.

(VIDEO): And then you book it out of there dragging Peter behind you because you’re pissed pic.twitter.com/Flq9hFb7qP

I don’t know about you but I can’t wait for the new season to start and for this to all play out.